We're home, we're exhausted, and it's time to de-compress.

We learned a LOT from the play-testing sessions at the conference, recognizing that we need to develop a third, interlocking "system" to give players more meaningful choices (but without paralyzing them with options).  We tested a few changes, and it seems the game has moved from being too balanced to being tilted too far in the favor of the Sisters.

More to come on the feedback after we've had a chance to sleep and recover. Below you'll find a few photos from our time at Tantrumcon, and we heartily thank the entire Tantrum House crew for putting on a fantastic inaugural event for the Upstate.

What we got to play

It wasn't all work! We were privileged to play a prototype version of Parks (info) by Keymaster Games (hello, Athens, GA!) which makes glorious use of classic National Parks artwork. It's a great family-weight game that will play well for many ages, and for both novice gamers as well as experienced ones.   We also enjoyed Doce by Smart Iguana Games, a company based only a few hours down the road in Charleston, SC (info).  Danny brought an amazing set of hand-carved, huge dice prototypes for their booth. The game itself comes in smaller versions, including travel sizes, but those big ol' wood cubes were a lovely touch.

Lori got time to demo Space Parks, also by Keymaster, and fell in love with this fast-moving, gorgeously designed game.  The graphic design and illustrations evoke the best of Golden Age science fiction book covers! You can pick it up on Amazon.

We put in some time with Scythe (link) and Viticulture (link), both produced by Stonemaier Games. Viticulture hit the table with the Tuscany expansion, one that was highly recommended to us by the game host. I agree, having played with Tuscany and heard about its expansions to the core gameplay. Both games are highly thematic, somewhat "crunchy" Euro-style games with good worker placement and interactions at the table.  We ended up buying Viticulture at our FLGS a couple weeks later!  (Shout-out to Empire Games.) 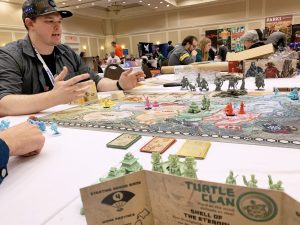 Lastly, we dug into a rich game of Rising Sun, Deluxe Edition (link to core game) with 3 other players on Sunday morning, taught by Derek Funkhouser, board game designer and one of the faces behind the Board Game Spotlight YouTube channel.

Derek was a delightful host, explaining the rules of this complex strategy game. Although Rising Sun's story focuses on samurai clans at war (or sometimes in uneasy alliance), the game itself puts players in interesting relationships rather than demanding constant head-to-head combat.

Each faction in the game brings unique abilities to the table. Lori's Turtle Clan, for example, could carry strongholds with them to many provinces rather than building them in static locations. Coart's Dragonfly Clan sped across the board on wings, popping up for unexpected battles at the last moment.

The game was probably our favorite experience as players at the con, providing a deep puzzle to solve, thoughtful player interaction, and jaw-dropping component design and graphics. It helped, of course, that we were playing with the deluxe edition and upgraded components.  But Rising Sun was a great convention game (it plays best with 5-6 players) and we loved it!